‘You kicked the ball’: Biden team accused of being ‘condescending to women’ after inviting footballer Sarah Fuller to inauguration 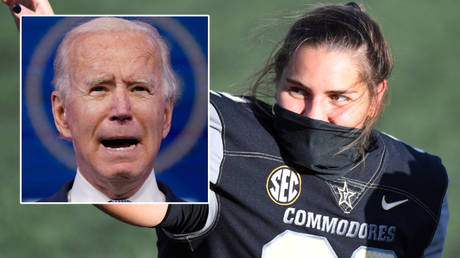 Vanderbilt University star Sarah Fuller, who hit the headlines when she took kickoff in a Power 5 men’s football game in November, will be at the inauguration of US president-elect Joe Biden – earning a puzzled reaction from some.

Soccer player Fuller was the only athlete named on a list of “everyday Americans” invited to the ceremony on Sunday, appearing in front of millions of viewers across the world at a ceremony hosted by Tom Hanks and trumpeted by the incoming administration as the start of a journey towards “America united”.

The honor will cap a whirlwind two months for Fuller, who went viral after taking part in the brief successful cameo in a game against Missouri, wearing a sticker on the back of her helmet that read “Play Like a Girl”.

“It’s an honor to be invited to participate in one of America’s greatest traditions,” Fuller announced on Twitter, receiving numerous messages of support and congratulations in return.

It’s condescending to me as a woman: “Good job, you kicked the ball!”. She’s a great soccer player and was helping out her University in a pinch. If they want to celebrate that, fine. Great rep of Vandy. But acting like she’s a great football PK is phoney to me.

Yeah I didn’t think it was virtue signaling when they did it.. I change my mind.

“This historic inauguration is especially meaningful for American women and girls. The glass ceilings are breaking and it is the time to lead like a woman.”

Vanderbilt coach Derek Mason labeled Fuller a “trooper” and a “champ” after calling upon her when his playing options were depleted by Covid-19, although he was fired the following day having led the team to a seventh consecutive losing season.

Many readers accused the Presidential Inaugural Committee of “virtue signaling” ahead of the Celebrating America primetime special that will screen the ceremony.

Kinda gimmicky. I think there’s a lot of women out there that can legitimately score points in football. This particular situation was kind of a stunt

they inviting a person that kicked 10 yards

The likes of Ashley Martin, who became the first woman to score at the Division I level in 2001, and Katie Hnida, who was the first to score at FBS level, were notable absentees from the invitees.

“It’s condescending to me as a woman,” said one critic. “‘Good job, you kicked the ball!’

“She’s a great soccer player and was helping out her university in a pinch. If they want to celebrate that, fine.

What does that have to do with it? She did what just about any D1 women’s soccer player could do. Big deal. When she outkicks a male kicker at any college level, I’ll be impressed. If she is better than what Vandy had, it speaks volumes about their program.

“Great rep of Vanderbilt. But acting like she’s a great football points kicker is phoney, to me.”

Another argued: “She did what just about any Division One women’s soccer player could do. Big deal.

“When she outkicks a male kicker at any college level, I’ll be impressed. If she is better than what Vanderbilt had, it speaks volumes about their program.”

Kim Ng, the first female general manager in Major League Baseball, will feature as one of the headliners alongside stars including actress Eva Longoria and music acts Jon Bon Jovi and the Foo Fighters.

Fuller showed her support for new vice-president Kamala Harris, sharing a tweet pointing out that Tuesday would be the final day on which the US had not had a female deputy head of state.

The senior goalkeeper converted two extra points on her subsequent appearance for Vanderbilt, at home to Tennessee on December 12.

‘I’m in pain’: Two skiers face amputation threat after being hospitalized by excruciating frostbite from race at minus 28 degrees