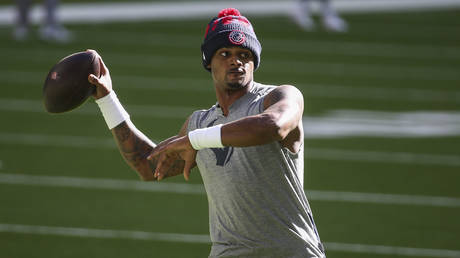 Watson has been one of the most dependable dual-threat quarterbacks in the league since he was selected by the Texans with the 12th pick in the 2017 NFL Draft but amid a turbulent season which saw the team struggle and fail to make the playoffs, the 25-year-old star has appeared to signal his intention to push for a trade away from the team.

Watson is understood to have serious concerns with the current direction of the franchise and was disappointed when the team reportedly failed to deliver on their promise of consulting with the player ahead of the hiring of a new general manager after under-fire boss Bill O’Brien during the 2020 season.

Watson was also thought to have been angered by the team’s decision to trade away star wide receiver Deandre Hopkins in the off-season, a move which broke up one of the most dependable quarterback-receiver partnerships in the league.

He seemed to endorse reports of conflict between team and player when he posted a cryptic tweet suggesting that his “anger level” was a “10“, lyrics from popular rapper Future.

But after hearing news Monday that Texans fans had planned a march to express their outrage at the handling of team affairs, Watson pleaded for calm and asked that fans don’t gather en masse in support of him due to the potential risks of Covid-19 infection.

I’m hearing there is a march planned on my behalf in Houston today. Although I am humbled I ask that whoever is organizing the march cancel for the sake of public safety. Covid is spreading at a high rate & I don’t want any fans to unnecessarily expose themselves to infection.

“I’m hearing there is a march planned on my behalf in Houston today,” Watson wrote Monday. “Although I am humbled I ask that whoever is organizing the march cancel for the sake of public safety. Covid is spreading at a high rate & I don’t want any fans to unnecessarily expose themselves to infection.”

Watson’s public call seems to have been heeded by the majority of the fanbase, with around 15 to 20 fans wearing the player’s famous #4 jersey and marching towards the team’s NRG Stadium.

It remains to be seen, though, if the fans’ outspoken tactic will be heeded by not just the Texans, but by Watson. The team have signalled that they will do all in their power to maintain their relationship with the star QB but, if reports are to be believed, it is the player who is exploring the possibility of seeking a trade.

And should the worst imaginable scenario for Texans fans unfold, it is thought that the likes of the New York Jets and the Carolina Panthers will be top of the queue to benefit from the Texans internal strife.