‘They are laughing at us’: Tennis ace rages at Australian Open and blasts Nadal & Thiem as Serb star speaks of ‘horror’ quarantine 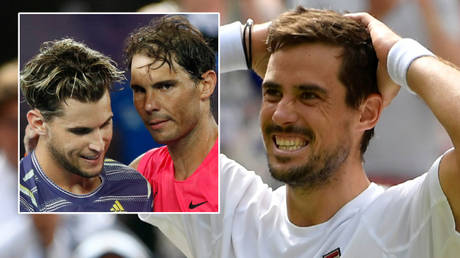 Tennis star Guido Pella has delivered a scathing assessment of the quarantine saga at the Australian Open and admitted that he has “given up” on competing – while Viktor Troicki has called the build-up “total chaos” and “horror”.

Argentine player Pella has been one of the players confined to a hotel under quarantine restrictions, and the 30-year-old is clearly feeling frustrated by a situation in which he claimed world number one Novak Djokovic’s balcony was larger than his room.

While some aces have been seen hitting balls against mattresses in their rooms, experienced Pella has been surprised by what he perceives as silence from top contenders Rafael Nadal and Dominic Thiem, although he said Djokovic had attempted to look out for the less high-profile arrivals’ interests.

“The Adelaide bubble management has been a hoax,” Pella told Tennis World USA. “It does not surprise me as nothing bothers me anymore, but that’s the way it is, although I’m not critical of Novak, far from it.

“There is a lot of marketing here. People who can do something turn their backs on you continuously.

“Novak has shown on many occasions that he has intentions and is involved for the common good. He has fought against the Adelaide bubble since he found out that they put him there; I do not know… how, but I know he has done it.

Djokovic courted fresh controversy earlier this week when it was revealed that he had been involved with an exchange with tournament boss Craig Tilley over the possibility of easing some restrictions under certain circumstances and improving conditions for players.

Pella has offered specific details of the difficulties players are facing while lashing out at unnamed figures who he feels betrayed by.

“If this hadn’t happened, I would have left with a positive feeling,” he said. “Now all the masks have fallen off.

“Many people say one thing and do another. In a pandemic context in which everyone is asked for empathy and solidarity, that the director of the Australian Open 2021 comes out to openly recognize that preferential treatment [for leading players] and whitewash it, it seems to me that they are laughing at us in the face.

“If you only care about three players, set up an exhibition with them, but don’t bring the rest of us.

“It’s hard that we are here without open windows, requesting to have five minutes of fresh air, and then you see Djokovic go out to a balcony bigger than my room.

“Regarding food, you have to try to take what they bring us, even if it is difficult. They give us the option of ordering food at home, but you get ice cream if you order something hot.

“This kills you physically and mentally. We already assume there is a favorable treatment for the best.”

The 2019 French Open semi-finalist said his attitude was “better now” than it had been when he faced “something similar” at last year’s US Open, but he holds little hope of being able to perform at his best when the tournament starts on February 8.

“You can go crazy if you think too much. They ask us to clean the room but we have nothing where we can throw dirty things or material to tidy everything up.

“When I leave the room, my only objective is not to get injured. I give up the competitive aspect. I can’t compete on a high level after this.

“I’m grateful to the pandemic that it has allowed me to see what the people around me are like and what the world of tennis is like.

“I will step on the court to try to do well and collect the money that corresponds to me.

“What makes me angry is representing Argentina in these terrible conditions, because I know that I can’t win matches.”

If Pella’s conclusions seem damning, Serb hopeful Viktor Troicki offered an even worse description of his experience at the qualifying event in Doha for the main draw.

The world number 202, who has performed with Djokovic in national competitions such as the ATP Cup, won three qualifying matches to make the main showpiece but regretted his decision to take part.

“If I knew, I wouldn’t have come,” Troicki told Sportski Zurnal, as revealed on Tennis Now via Tennis World USA.

“Total chaos, horror as far as everything is concerned. I’m locked up for 14 days, I can’t leave the room.

“No training, nothing. My Grand Slam is failing, I can’t get ready for five sets in the room.

“All preparations are failing. Two weeks of lying in bed – it is certain that I will have to get back in shape for the next month and a half.”

Ice Palace Maze In Stillwater Made With 500,000 Pounds Of Ice – WCCO