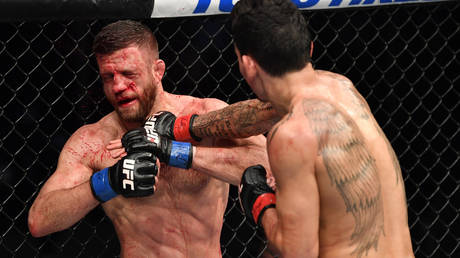 Calvin Kattar was on the receiving end of five rounds of incessant punishment from former UFC featherweight champion Max Holloway in Abu Dhabi on Saturday night, and per his coach Tyson Chartier, it has left a few scars.

How a Bride Chose a Romantic Yet Practical Wedding Registry

Kattar was routed for practically the entirety of the five-round main event fight which kicked off the UFC’s latest residency on ‘Fight Island’ this past weekend, absorbing a UFC record 445 stand-up strikes from the imperious Holloway in what was a career-best performance in the Octagon.

So dominant was the Hawaiian throughout that one judge scored the fight as a remarkable 50-42 win (the other two judges had it 50-43) – marking the first time that a 50-42 score has been awarded in a UFC bout since former middleweight champion Rich Franklin did the same against David Loiseau 15 years ago.

As noted by ESPN’s Marc Raimondi, Holloway’s output was such that he landed more significant strikes in the fight than any two fighters in a single fight in more than quarter-century history of the UFC.

And as one might expect, the damage more than took a toll on Boston’s Kattar.

UFC president Dana White told the media immediately following the main event that Kattar had been transported to hospital to have his injuries seen to, with Kattar’s coach Tyson Chartier later telling MMA Junkie that his fighter suffered a broken nose in the contest.

He also suffered a nasty gash to his scalp as a result of a Holloway elbow strike which required 8 staples to close.

The post-fight medical suspensions for Saturday’s event have yet to be made public but it is highly likely that Kattar will be facing an extended spell on the sidelines as he licks his wounds from what was a fiercely one-sided contest.

The loss snaps a two-fight win streak for the tough Kattar and takes his career record to 22-5, and a few rungs lower in the UFC’s featherweight title picture.

Holloway, meanwhile, has never looked better in the cage and will be hoping that his outstanding performance in Abu Dhabi brings him one step closer to regaining the UFC’s 145lbs title he held between 2016 and 2019.

‘You can’t post this’ : UFC star Jon Jones slammed for sharing video of him killing wild boar during hunt

‘Djokovic is a tool’: Nick Kyrgios slams complaints from quarantining stars as Tomic’s girlfriend is forced to ‘wash own hair’