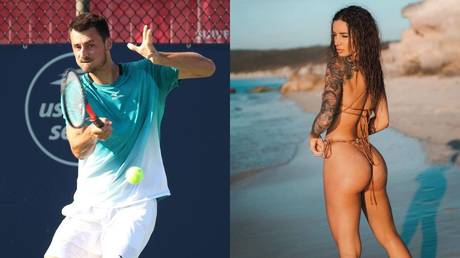 Aussie tennis ace Bernard Tomic has angrily claimed he “risked his life” and does not need the money after reaching the Australian Open – earning emotional congratulations from ‘Love Island’ star and OnlyFans model Vanessa Sierra.

Florida manatees are getting 3,000 pounds of lettuce a day in a state effort to help the starving animals

The 26-year-old model, who accompanied the player during his Doha trip to the qualification rounds, posted a video on her social media page praising her boyfriend for his successful attempt to book a spot in the Australian Open main draw.

“Racket got some special powers,” she captioned the video, which showed her vigorously changing the colors of Tomic’s racquet with the help of the social media platform’s special effects.

“Congrats to my baby on qualifying for the Aus Open.”

Former world number 17 Tomic, who is now ranked at a lowly 228, progressed to the main draw of the Grand Slam after beating compatriot John-Patrick Smith 6-4 5-7 7-6 (10-7) in his third and final qualifying match on Thursday.

In a post-match interview, Tomic was visibly irritated by questions around his ambitions to regain his place among the top 20 players.

The temperamental star said that he had “risked his life” while trying to qualify, warning journalists not to pose similar questions.

“I am in Doha – I risked my life flying here, my health, Covid’s around, many are sick, with many things that can go wrong,” he said.

“I’m risking my life and I’m playing and competing. Of course I want to get there. Otherwise I’d be hanging my rackets up.

“I don’t need to play tennis again. I’ve got enough money, so why are you asking me that question? Don’t ask questions like that,” he added.

Tomic has been known for his controversial behaviour, including legal issues, altercations with match officials and fans and accusations of tanking during competitions.

The German-born 28-year-old has not been beyond the second round of a Grand Slam since reaching the third round in Australia in 2017.