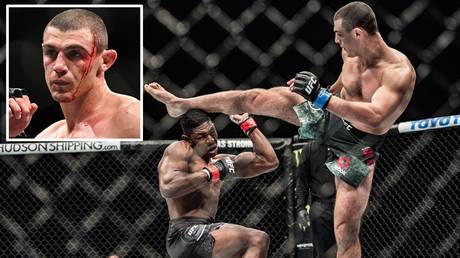 On a night full of drama at the Etihad Arena in Abu Dhabi, the man who scored the UFC’s “Knockout of the Year” in 2020 suffered a huge knockout loss of his own at UFC on ABC 1.

Spring’s Maximalist Prints Will Give You Something to Smile About

On a night full of drama at the Etihad Arena in Abu Dhabi, the man who scored the UFC’s “Knockout of the Year” in 2020 suffered a huge knockout loss of his own at UFC on ABC 1.

Buckley’s stunning spinning back-kick KO of Impa Kasanganay on “UFC Fight Island” last year saw him go viral and earn “Knockout of the Year” honors. He even followed up that KO with another, as he finished previously undefeated Jordan Wright in his next bout.

With the UFC giving him a main card spot on network television Stateside, expectations were high that Buckley could deliver another eye-catching moment to win over a host of new fans. But those dreams turned into a nightmare for Buckley when he faces Italian middleweight Alessio Di Chirico, who had never been knocked out before in his career.

Di Chirico stood and traded with Buckley and, though the American appeared to be having the better of the exchanges early on, the Italian produced a moment of magic to separate Buckley from his senses and score a huge KO of his own.

With the pair trading power shots, Di Chirico unleashed a perfectly-timed head kick that caught Buckley flush as he dipped into close range. Buckley instantly crashed to the canvas as the referee dived in to space him further punishment.

Di Chirico didn’t hang around to celebrate his victory, however, as he told UFC commentator Jon Anik that he wasn’t happy that only the winners get interviewed after fights. Then he walked out of the cage.

UFC commentator and former welterweight title challenger Dan Hardy uttered the commentary line of 2021 so far as he described the moment Buckley went to the ground.

“Watch how Buckley falls. He looks like he’s staring into the eyes of Medusa!”

Viewers on Twitter had plenty to say about the stunning finish, with one tweeting, “They put Buckley against Di Chirico, who was on a 3 fight losing streak, hoping they would get something spectacular on ABC. They succeeded.”

One even suggested Buckley’s technique needed some major attention, saying, “Joaquin Buckley needs to sort his punching stance out because that’s twice in four fights he’s been knocked silly by a strike he saw coming about five minutes before it arrived but was so wide he couldn’t escape it.”

What seems clear is, whether he’s dishing out the knockouts or finding himself on the receiving end, you should never take your eyes off the screen when Joaquin Buckley is in action.

Aldi, Trader Joe’s and others are paying workers to get a vaccine

No beaches or booze: What South Africa’s top tourist spot looks like during Covid