Ronald Koeman puts on a brave face after admitting Barca are UNLIKELY to sign players in January window . 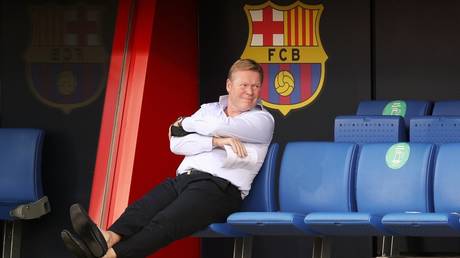 Barcelona boss Ronald Koeman said the club’s postponed presidential election will have a knock-on effect on his team-building plans, with the lack of leadership leaving him unable to sign players during January’s transfer window.

Mass shooting solutions: Why you should listen to what kids have to say

The club’s presidential election has been pushed back from January 24 to March 7 due to the rise in Covid-19 cases in the region.

It’s a decision that has been taken with public safety in mind, but the downside is that it leaves Koeman without a permanent board in place to sign off any transfer deals the Dutchman had targeted for the mid-season window.

But with Barca forced to play catchup in the second half of the season, fans hoping Koeman could strengthen his squad for the remainder of the campaign look set to be disappointed due to the goings-on at board level.

One man who isn’t letting it frustrate him is Koeman himself, who insists rumors suggested he is upset at the situation are wide of the mark.

“I should point out that I’m fine, and happy. I know what the club’s financial limitations are. If it’s not possible to make any signings, so be it. We’ll move forward with what we have.”

Barca had been linked with a swoop for Manchester City’s Eric Garcia, while backup goalkeeper Neto is believed to be wanting to leave the Camp Nou. But the circumstances at the club mean Koeman has told him that he will have to stay put for the time being.

“Youngsters will go and get minutes elsewhere in order to improve, but Neto’s case is different,” said Koeman.

“His agent asked the club if he could leave but we’ve said no. He’s an important goalkeeper for us and we want to have all positions adequately covered.”