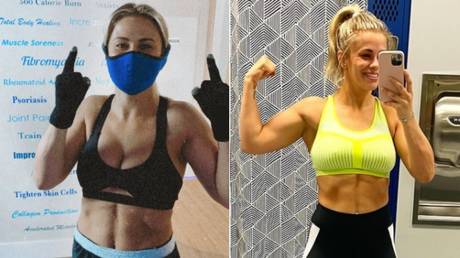 Super Bowl 2021: Sarah Thomas Will Be the First Woman to Referee the Big Game

‘Too many heads are going down’: Andy Robertson criticises Liverpool performance after Chelsea defeat

Former UFC starlet-turned-Bare Knuckle scrapper Paige VanZant is leaving no stone unturned as she prepares for her BKFC debut.

VanZant takes on Britain Hart on February 5 on a fight card that also features former UFC fighters Johnny Bedford and Chris Leben, and she’s taking her preparation every bit as seriously as she did her fights in the octagon.

In a sneak peek into her fight prep ahead of the fight, VanZant shared a video of her undergoing some cryotherapy as she recovered from the rigors of a training session.

With her husband Austin Vanderford on filming duties with her mobile phone, the Bellator middleweight shared footage of “PVZ” dancing while clouded in oxygen vapor as she underwent ice-cold recovery therapy at a facility in Fort Lauderdale, Florida.

After her session, she emerged and took a quick pic, while still wearing her face mask and cryo gloves, and it’s clear to see that “12 Gauge” Paige is in tip-top shape ahead of her bout in three weeks’ time.

She later posted a pic saying, “Always nice when you can clearly see the progress of your hard work!! February 5th can’t come soon enough!!!”

Thanks to Bridgerton, Fancy Tea Sets Have Become the New Home Must-Have