‘New king in town’: Michael Chandler DESTROYS Dan Hooker inside one round at UFC 257, calls out Khabib 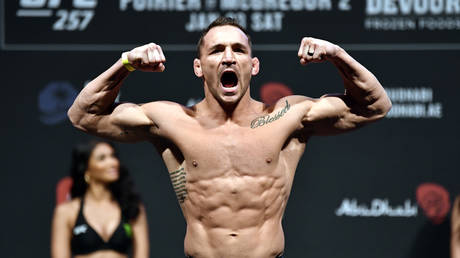 Michael Chandler arrived on the UFC scene in explosive style with a first-round finish of Dan Hooker in their lightweight bout at UFC 257 on Fight Island.

J. Smith-Cameron on Taking the Reins of Waystar Royco in ‘Succession’

Making his first appearance inside the UFC octagon, three-time former Bellator champion Chandler flattened the typically durable Hooker with a huge left hand midway through the first round at the Etihad Arena, following up with a barrage of ground shots to finish the contest.

It was the perfect introduction to MMA’s biggest stage for the 34-year-old American – and left social media proclaiming that the “hype is real” surrounding Chandler.

OK I’m excited about Chandler, that was awesome 🇺🇸

UFC boss Dana White had said reigning lightweight champion Khabib Nurmagomedov would be watching events at UFC 257 closely, suggesting that something “spectacular” could lure the Russian out of retirement for one final fight.

Chandler used his post-fight interview to proclaim that there was a new king in town, calling out a host of lightweight rivals including Khabib.

As starts to life in the UFC go, they rarely come more spectacular than Chandler’s in Abu Dhabi.

‘She had to knock her out TWICE!’ Fans rage at UFC referee Herb Dean after crazy finish sees Rodriguez shock Ribas (VIDEO)