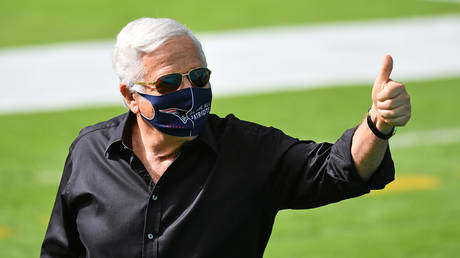 Robert Kraft, owner of the NFL’s New England Patriots, won’t be the star of the internet’s latest sex tape after a judge ordered that video evidence against him allegedly engaging in illicit acts in a massage parlor be destroyed.

A Federal judge in Florida ruled that video footage featuring Kraft and several others must be wiped from existence after police surveillance of a massage parlor which was allegedly participating in prostitution and human trafficking was deemed unlawful.

A misdemeanor charge of solicitation against Kraft, who is the chairman and chief executive officer of the Kraft Group, was dropped last year after it was ruled in an appeals court that video evidence featuring Kraft was inadmissible. Legal representatives for Kraft had argued that they were fearful that footage would be leaked to the internet in what would be a highly embarrassing issue for their client.

“Considering that the videos never should have been created according to judicial rulings that are binding and conclusive, the videos should be destroyed so that they can never be subject to any misuse, intentional or otherwise,” his attorneys stated.

Kraft, 79, was among several people charged in February 2019 in a wide-ranging investigation of massage parlors which were suspected of being engaged in illegal acts with their customers.

Police conducted surveillance of several sites which included installing hidden camera in lobbies and massage rooms, with authorities naming Kraft as being suspected of paying for sex acts with massage parlor workers.

The incidents are alleged to have occurred on consecutive days in January 2019 at the Orchids of Asia spa in Jupiter, Florida.

Kraft pleaded not guilty to the charges but subsequently issued a public apology in relation to them.

“I am truly sorry. I know I have hurt and disappointed my family, my close friends, my co-workers, our fans and many others who rightfully hold me to a higher standard,” he said.

The Florida court also ruled that a “neutral third party” will oversee the destruction of the offending evidence.