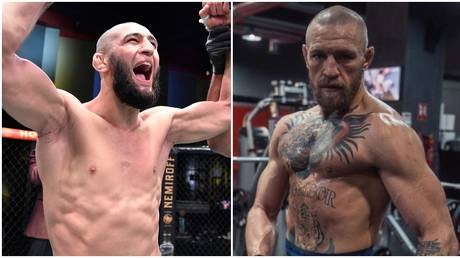 Surging UFC star Khamzat Chimaev has fired yet another social media salvo at Conor McGregor ahead of his rematch with Dustin Poirier this weekend, saying that he has respect for Ireland but not the fighter he calls a ‘chicken’.

Businessman who smashed record to pay whopping $5.2MN for sports card claims it was a ‘tremendous deal’ — … Sport…

How to Get Fuller Brows Fast: The Pro’s Guide to Backcombing

Chechen-born Chimaev has been anything but a shrinking violet since making his UFC debut in the first iteration of ‘Fight Island’ last summer, where he turned in a couple of star-making performances in the Octagon in the span of just 10 days – all while absorbing a total of just TWO strikes.

Chimaev was quickly seized upon by the UFC publicity machine and cast into another high-profile fight less than two months later. This time his opponent, the grizzled veteran Gerald Meerschaert, could last just 17 seconds in the cage with the impressive newcomer.

And as Chimaev’s star began to shine at its brightest, so too did the reputations of the types of fighters he was placing in his crosshairs.

Shortly after beating Conor McGregor’s training partner John Phillips, and following that up a little over a week later with a win against Ireland’s Rhys McKee, McGregor replied to a social media post by Chimaev by writing: “rat lip“, presumably referring to the scar which adorns Chimaev’s upper lip. The tweet was subsequently deleted.

In response, Chimaev petitioned UFC boss Dana White for an opportunity of what would have been his THIRD fight on ‘Fight Island’ where he said he wanted to complete his run of work by having “dessert“, or a fight against McGregor.

Now, some months later, the acrimony between the two seems as real as ever. In response to a UFC social media post promoting this weekend’s UFC 257 headliner between McGregor and Dustin Poirier, Chimaev replied to say: “The chicken is back“.

Chimaev’s words seem designed to tempt the notorious Irishman into the cage with him, but ‘Borz’ has his hands more than full in his March date with top welterweight contender Leon Edwards – a fight which has been postponed on two prior occasions.

And one man who seems to be backing McGregor in his Twitter tete a tete is 170lbs loudmouth Mike Perry, who took to social media to chastise Chimaev.

“You’re the only chicken I see pulling out of fights,” wrote Perry.