‘Jake can actually win this’: MMA world reacts as Ben Askren signs up for boxing bout with YouTuber Jake Paul 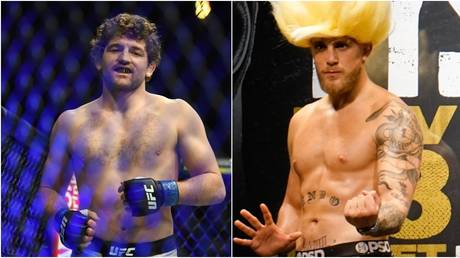 After making light work of ex-NBA player Nate Robinson in his second pro boxing match, YouTuber Jake Paul will face former UFC fighter Ben Askren in his next trip to the ring, and social media thinks Askren could be in trouble.

Alisal Fire in California has prompted evacuations, road and Amtrak closures. And the heavy winds are making it hard to…

A 2nd grader at a Christian school was expelled for telling another girl she had a crush on her, mother says

As confirmed by ESPN’s Ariel Helwani on Tuesday, former Olympic wrester Askren has signed up for what will be an eight-round fight on April 17 against the younger of the two Paul brothers –  both of whom who have successfully transitioned from online pranks to carve out lucrative careers in prizefighting.

The Paul vs. Askren fight is scheduled headline the Triller event, which promoter Ryan Kavanaugh says will feature several big names from the worlds of boxing, MMA and social media.

The fight comes after Askren publicly accepted Paul’s offer of a fight in what was a slew of in-ring challenges issued by the 24-year-old and after Paul appears to have come up short in his mission of coaxing Conor McGregor back to the world of boxing with an offer of a fight which Paul says would earn the Irishman upwards of $50 million.

But Askren, who retired from MMA following defeat by Demian Maia in October 2019, says that he is more than willing to be MMA’s representative in shutting up the infamously vocal Jake Paul.

“I know Jake Paul is enjoying pretending he is a fighter,” Askren said in a statement.

“I think on April 17 he is going to have a rude awakening to what being a fighter is really like. Jake has led a privileged life and doesn’t really know what the meaning of being a fighter is. I’m going to put his dreams to an end.”

However, some MMA fans aren’t quite sharing Askren’s confidence.

While the 36-year-old former Bellator world champion is among the finest grapplers to have competed in mixed martial arts, his boxing was often the source of criticism – and some are predicting an embarrassingly brief night for Askren.

Jake Paul will fight Ben Askren in an eight-round pro boxing match on April 17, per Triller founder Ryan Kavanaugh. The fight will serve as the main event of the next Triller Fight Club card. Location TBD.Done deal.

Hmm, jake can actually win this. Ben has no stand up game lol.

Ben Askren has agreed to fight Jake Paul in boxing this March. If Ben lands one of his patented sleeper combos that kid will be dribbling pea soup down his face for the rest of his life. No boxing commission should allow this to happen. God help us all… pic.twitter.com/99veLUsl7C

Others, however, begged Askren to knock Paul out so that the YouTuber’s combat sports ambitions were finally laid to rest.

Dear Mr Benjamin Askren, I speak for the rest of the MMA community when I say that if you knock out Jake Paul, we will strike your loss to Jorge Masvidal from the record and hail you as the savior of our sport until the end of time. Put an end to this madness. God bless.

Paul, meanwhile, was his typical brash self when speaking on the match-up.

“Ben Askren is a two-time NCAA champion, a world champion in two different global mixed martial arts organizations and has less losses on his record than Conor McGregor,” Paul said, adding in a sly dig at the recently-defeated McGregor.

“Me, on the other hand, I started boxing two years ago and I’m still going to knock his ass out faster than Masvidal. These MMA guys think because they throw punches they know how to box. The world complained because I knocked out a basketball player and not a real fighter. So now I’m giving the people what they want by taking on a ‘real fighter.

“After Ben Askren is added to my knockout meme collection, what can anybody say? Thank you to Triller Fight Club for giving me the platform to once again put a man to sleep. April 17, it’s lights out for Askren.”

On the surface, it is easy to see why Paul is so confident. Askren, as already noted, has been criticized for his stand-up skills in mixed martial arts but repeatedly fell back on his stellar grappling skills as he opened his career with 20 fights without experiencing defeat.

That run came to a spectacular end when he was knocked out by a Jorge Masvidal flying knee four seconds into his sophomore UFC fight but the reality for him – and for Paul – is that Askren has been in wars with numerous MMA sluggers and, Masvidal aside, has never tasted a knockout defeat.

Jake Paul wants to be the man to correct that record. Regardless of whether or not he achieves this, one suspects that the sheer spectacle on show April 17 will more than make up for any athletic deficiencies in the ring.