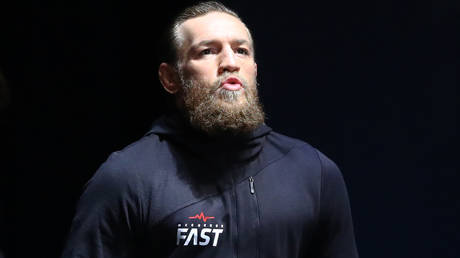 Conor McGregor has been embroiled in more than a few outside-of-the-cage scandals during his UFC tenure but told the media at Thursday’s UFC 257 press conference that a newly-surfaced lawsuit brought against him has no merit.

Reports from McGregor’s native country of Ireland this week noted that a woman and her mother have filed a multi-million euro lawsuit against him stemming from allegations of criminality in 2018, with McGregor and an associate of his being named as co-defendants.

The newspaper stated that McGregor vigorously denies any wrongdoing and adds that the alleged incident was thoroughly investigated by Irish police, who ultimately decided to not bring any charges against the former two-weight UFC world champion.

“It was investigated thoroughly over the course of two long years and I was cleared of any wrong doing. And that’s it,” he added, before explaining that his full focus was on Dustin Poirier and the UFC 257 main event this coming Saturday.

According to information released by the New York Times, the lawsuit dates back to allegations of sexual assault against McGregor from December 2018, with the woman’s claim centered around seeking damages of between $1.79 million and $2.13 million for lost wages in the past and in the future, a new home and medical expenses to be paid. She says that she has been unable to work since the alleged incident.

McGregor, who is set to make his first UFC appearance in more than a year this weekend, didn’t elaborate further but signalled that he isn’t concerned by the claim, but sidestepped to focus on the upcoming fight.

“There’s so much positivity in my life,” he said. “I’ve got a great challenge ahead of me on Saturday night and I’m very excited to get in.

“I’ve put in an immense amount of work to get my frame correct at 155, to get my conditioning [in order]. I want to answer questions here, and I hope Dustin can bring it to me and we can have a good fight.“

A spokesperson for McGregor, Karen J Kessler, addressed the allegations earlier this week.

“After an exhaustive investigation conducted by the Gardai (Irish police) which, in addition to interviews of the plaintiff, included interviewing numerous sources, obtaining witnesses’ statements, examining closed circuit footage and the co-operation of Conor McGregor, these allegations were categorically rejected,” she said.

“The plaintiff knows the facts contradict the assertions in this lawsuit. Mr McGregor will dispute any claims and is confident that justice will prevail.“

McGregor has come to the attention of authorities on several past occasions. In 2018 he was arrested and sentenced to perform community service after throwing a dolly through a bus containing UFC rival Khabib Nurmagomedov.

He has also landed in hot water for smashing a fan’s phone in Miami and punching a man in a Dublin pub in recent years.

3-year-old fell out window in Rock Island, died from cold | State and Regional

Ronald Koeman puts on a brave face after admitting Barca are UNLIKELY to sign players in January window .