‘I’m in pain’: Two skiers face amputation threat after being hospitalized by excruciating frostbite from race at minus 28 degrees 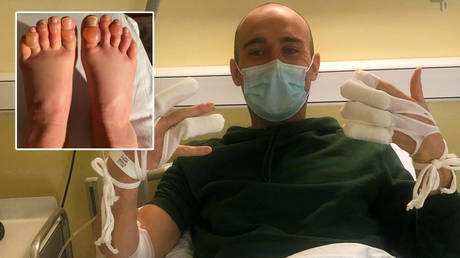 Two skiers could have toes and fingers amputated after braving incredibly cold conditions to compete at the La Diagonela marathon in St. Moritz, Switzerland, which left several participants in hospital with severe frostbite.

The 60km race was shortened by five kilometers as a result of the extreme weather conditions, but the reduction wasn’t enough to save some of the skiers from suffering horrific frostbite during the race.

The Norwegian Broadcasting Corporation (NRK) reported that temperatures reached -28 Celsius at certain parts of the route, forcing many skiers to withdraw from the event long before the finish.

Swedish competitor Michael Eklof suffered frostbite injuries that led to necrosis in his toe following the race. The skier may need to have his toe amputated, and said that he could not put his shoes on due to intolerable pain.

“There are many thoughts in my head,” he admitted. “The main thing is, ‘what happens if I lose my finger?’

“The doctors say they don’t know if they can keep it. Perhaps it will rot. Time will tell.

“If I don’t lose it, it will be good. Now I feel severe pain and I can’t even put on shoes.”

Another race participant, Germany’s Patrick Ottilinger, had his fingers severely affected by frostbite, but expressed hope that he would manage to avoid amputation.

“Two fingers have no feeling at all and one has become completely blue. According to the doctors, I can only wait and try to keep my fingers warm and active and hope that they will eventually come to life,” he said.

Norwegian athlete Andreas Nygaard, who finished second, was taken to hospital after the race having received second-degree frostbite injuries on his fingers but will not require amputation.

Frenchman Thomas Joly, who endured frostbite of four fingers of the third degree and one of the second, admitted that he had been physically sick.

“I stopped feeling my fingers right after the start, and after 50 kilometers I got a headache,” he said.

“I vomited and had to leave the race. It’s a shame because in the summer we sacrificed a lot to be here.

“The doctors say I won’t be able to ski anymore this season. I think the jury’s decision to hold the race was wrong. It put us in danger.

“Now it will take me a long time to fully regain sensitivity at my fingertips. I must not expose them to cold for the next three months.”

Despite Joly’s warning, the head of the series, David Nilsson, insisted that the race should have continued.

“It is very sad for everyone who was injured,” he said. “But the rules are clear and I believe [we] did the right thing.

“It is important that skiers also adapt their clothing and equipment to the weather. It has not been this cold for a long time, so perhaps not everyone was fully prepared for this.”

The competition was won by Sweden Oskar Kardin, who safely completed the marathon without sustaining any injuries.

‘You kicked the ball’: Biden team accused of being ‘condescending to women’ after inviting footballer Sarah Fuller to inauguration