Holl of Fame: Khabib says Max Holloway ‘could become greatest of all time’ after striking masterclass on UFC Fight Island 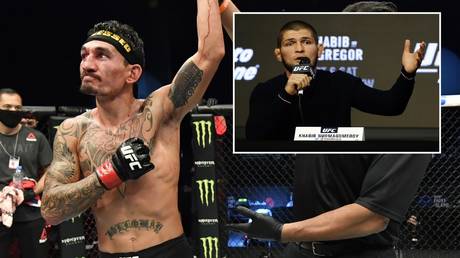 Max Holloway earned the Khabib seal of approval for his sensational striking clinic against Calvin Kattar on Fight Island, with the Russian lightweight king even asserting that Holloway has time on his side to become the GOAT.

Pink Suits for Men? The Color Is Catching On

Holloway smashed a host of UFC records as he produced a career-best performance to dominate the durable Kattar across all five rounds of their featherweight bout in Abu Dhabi at the weekend.

The victory returned ‘Blessed’ to the win column after back-to-back defeats against Aussie 145lbs champion Alexander Volkanovski – the second of which came via split decision after a contest many felt Holloway had edged.

The 29-year-old had a point to prove at the Etihad Arena and did so emphatically as he picked apart Kattar from the opening bell, even finding time in the final round to casually chat with the cageside commentary team while slipping punches from his opponent.

The rave reviews for the sensational showing now include a ringing endorsement from Khabib.

The Dagestani himself was set to face Holloway when the American stepped in at short notice at UFC 223 back in 2018, but the bout fell through when Holloway failed to make weight, despite the pair enjoying a memorable press conference.

After his near-flawless win against Kattar, Holloway threw his hat into the ring as the man to lure Khabib back into the octagon, after ‘The Eagle’ challenged his lightweight rivals to “show something spectacular” if they want him to reverse last year’s retirement decision.

A Khabib-Holloway showdown seems unlikely, but the Russian was clearly impressed with what he saw and said the former featherweight champion could press his case in the GOAT conversation in the coming years.

“I think about Max, he’s already one of the best who’s ever competed in MMA. Probably the best featherweight of all time,” Khabib told the Full Reptile YouTube channel.

“It was his best performance. When we look at Max, he’s not old, but he’s had a lot of fights in the UFC.

“It was not when he was champion. It’s going to come if he keeps focused and doing everything that he needs to do.

“I really like Max, I was supposed to fight with him and he didn’t make weight.

“His time’s going to come, maybe end of the year, next year… he has potential to be even greater than he was [in his last fight].”

Khabib is a well-known chatterbox in the octagon, talking to his opponents and even cageside attendees during fights.

He said he enjoyed Holloway’s showboating when the Hawaiian declared “I’m the best boxer in the UFC” to the commentary team while swerving punches from Kattar, in scenes which went viral and earned comparisons to Muhammad Ali.

“I love this what he’s doing, fighting and at the same time talking with his opponent, talk with some corners or Dana,” Khabib said.

“About [Holloway being] the best boxer, I don’t know, but one of the best. He has very good cardio I think, a very good chin, and now his experience in fights is coming more and more.

“It was his best performance, but in the future he has a couple more years to show and maybe become the best fighter of all time.”