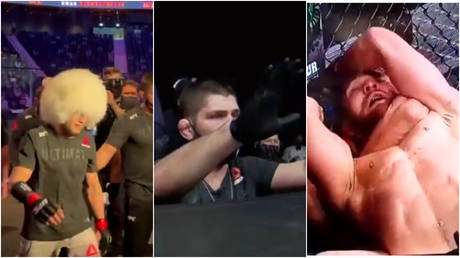 With his cousin Khabib looking on, Umar Nurmagomedov looked every inch the rising star that his coach Javier Mendez says he is, dominating the stand-up and grappling en route to a second-round finish of the gritty Kazakh Morozov.

Diaspora Co.'s Fair-Trade Spices Will Enlighten More Than Your Cooking

Nurmagomedov, now 13-0 as a professional, looks set to continue his famous family name in the Octagon for many years to come after he dazzled on “Fight Island” in what was his delayed debut fight in the UFC, showcasing a series of outstanding kicks and grappling exchanges en route to winning by second-round rear-naked choke submission.

With UFC lightweight champion Khabib Nurmagomedov in his corner and AKA training partner Daniel Cormier in the commentary booth, the fight may have had something of a familiar feel for the 25-year-old.

The method of victory, though, certainly wasn’t a surprise. It is the sixth submission win on the Russian’s perfect record, and suitably reflected the style of fighting for which his family name has become known.

But this was no walkover, nor was it intended to be. Morozov came into the fight with a considerable reputation of his own, having won five straight fights in the M-1 promotion – all but one of those coming inside the distance.

The Kazakh bantamweight proved to be a dangerous foe early, frequently threatening with his perpetually-cocked right hand. However, the speed of Nurmagomedov’s striking techniques – and in particular his freakishly speedy question-mark kick – flummoxed Morozov as the first round wore on.

Nurmagomedov landed a glancing high kick early in the second which forced a hasty withdrawal from Morozov, and that proved to be the beginning of the end as Nurmagomedov amped up the pressure.

Morozov held his own on the ground through several exchanges but soon found himself in checkmate as Nurmagomedov pulled a technique out of his family’s box of tricks to sink in the fight-ending submission which temporarily robbed Morozov of his consciousness, handing Nurmagomedov his debut UFC win.

“Happy. I feel good,” Umar told Daniel Cormier in English after the fight, before UFC lightweight champion Khabib took over the translation duties.

“He talked about me. Nine years ago, 20th January 2012, I beat my opponent like this with this choke and today he did this, but I did it in the third round and he did it in the second round,” Khabib explained to Cormier.

The fight Khabib was referring to was his own UFC debut against Kamal Shalorus, a fight which came on the prelims of a FOX card headlined by Melvin Guillard and Jim Miller.

Judging by the manner of the win, and improving upon Khabib’s own UFC debut bout in the organization one year shy of a decade ago, the latest name from the Nurmagomedov assembly line seems more than capable of forging his own legacy in the sport.