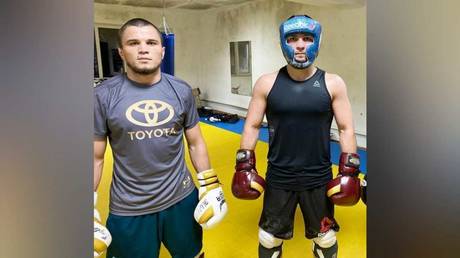 While the future of the most prominent fighter in the Nurmagomedov clan remains unresolved for now, AKA head coach Javier Mendez says there is some significant talent coming from the family’s assembly line.

Chelsea vs Luton LIVE: Result and reaction from of FA Cup fixture today

After a couple of false starts, the undefeated Umar Nurmagomedov will finally make his UFC debut on ‘Fight Island’ this Wednesday against Kazakh standout Sergey Morozov.

And the man tasked with guiding the young bantamweight’s ascent to the MMA major leagues, American Kickboxing Academy coach Javier Mendez, says that Umar has the skillset to suitably represent his famous fighting name.

“Umar’s awesome, I expect he’s going to be the world champion in five or six fights,” Mendez said to RT Sport in Abu Dhabi ahead of this Wednesday’s second of three fight cards.

“But he’s completely different from Khabib. In the way he fights, he’s more of a striker-type base guy. But he can do it all, he can do everything.”

That certainly is high praise from one of the sport’s most prominent trainers and the man who, in tandem with Abdulmanap Nurmagomedov, guided Khabib’s career to legendary status.

But Mendez makes clear that as good as Umar is, he and highly-rated fellow family member Usman Nurmagomedov (who has signed for rival promotion Bellator) would be hard-pressed to outshine the accomplishments of the undefeated UFC lightweight champion.

There can only be one ‘best ever’, Mendez opines, and while that title can suitably be applied to Khabib, he says that Umar and Usman’s accomplishments in mixed martial arts will be significant.

“They’re going to be champions, but we’ll see if they’re better than (Khabib), because Khabib is pretty incredible,” Mendez added. “I can say they’re better kickers or boxers, I don’t know if they’ll be better ground guys than him, or as strong mental. Umar is the one that’s closest mentally, he’s pretty strong mentally.”

Holl of Fame: Khabib says Max Holloway ‘could become greatest of all time’ after striking masterclass on UFC Fight Island