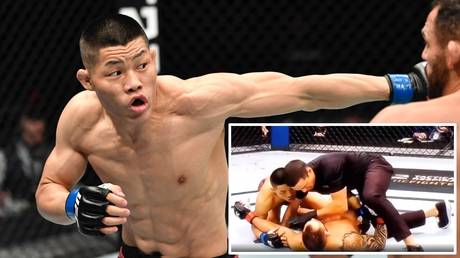 On a spectacular night of fights on UFC Fight Island, Chinese welterweight Li Jingliang stood out with a stunning knockout of returning Argentine contender Santiago Ponzinibbio, prompting an outpouring of love on social media.

Jingliang, whose sunny demeanor and crowd-pleasing fighting style have made him a firm favorite with knowledgable fight fans around the world, stepped in to take on Ponzinibbio, who was making his long-awaited return from a run of illness and injury that kept him out of the octagon for more than two years.

But while most had pegged Ponzinibbio to pick up where he left off and extend his seven-fight win streak, it was Jingliang who delivered the highlight-reel moment as he knocked out the Argentine with a huge punch to score a memorable win. He then immediately checked on his stunned foe, then celebrated wildly on top of the cage.

Jingliang’s win, and subsequent reaction, led to a host of tweets praising the Chinese fighter for his performance, and his conduct inside the cage.

One tweeted, “I always enjoy seeing exchanges between fighters like Li Jingliang offered Santiago Ponzinibbio after the fight was over. I prefer to see sportsmanship before celebrating or showboating.”

Another referenced Jingliang’s willingness to join Ponzinibbio in his tribute to Diego Maradona on weigh-in day, saying, “I enjoyed Jingliang holding up the Maradona poster that Santiago brought to the face off after he saw Santiago needed some assistance with it. It was a simple act but I really liked it.”

Another simply said, “Li Jingliang is adorable and I love him.”

Jingliang’s spectacular win improved his career record to 18-6, with 10 of those victories coming inside the UFC octagon, and will almost certainly land him a bout with a ranked opponent in his next matchup.

No beaches or booze: What South Africa’s top tourist spot looks like during Covid