‘He can’t even look at him!’ Fans in hysterics at image of clenched-fist Klopp & Fernandes after Man Utd dump Liverpool out of cup 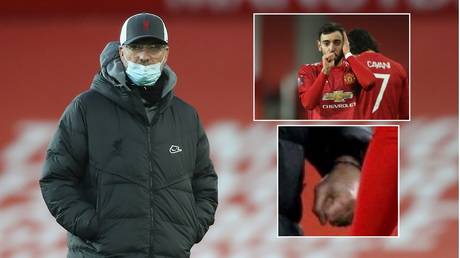 If a picture paints a thousand words then an image of Jurgen Klopp and Bruno Fernandes appeared to perfectly capture the mood after the Manchester United midfield hero dumped Liverpool out of the FA Cup on Sunday.

Fernandes came off the bench midway through the second half at Old Trafford before curling a stunning free-kick into the bottom corner of Liverpool goalkeeper Alisson Becker’s net to give United a 3-2 win and send them into the fifth round.

The result piled more misery on Klopp and his team as they struggle to get out of an alarming slump which has seen them win just one of their last seven games in all competitions – and even that sole victory came against a depleted Aston Villa who were forced to field a youth team due to a Covid-19 outbreak.

After a slight drop from his usually soaring standards in recent games, Fernandes was back to his influential best in a second-half cameo which sealed the win for his team after goals from Mason Greenwood and Marcus Rashford and a double from Mo Salah had locked the game at 2-2 until the 78th minute.

That the Portuguese scored the winner was seen as particularly sweet by many United fans, after Klopp’s recent swipe at the number of penalties the Old Trafford club have been awarded thus far this season – which are more often than not converted by the midfield star.

But this time Fernandes stepped up to do the damage from a free-kick, swinging the ball around the wall, over the head of ducking Liverpool midfielder Thiago Alcantara and into the bottom corner.

Jurgen Klopp: “‘I heard now that Manchester United had more penalties in two years than me in five-and-a-half years.” Bruno Fernandes took that personally and decided to score a free kick 😅 pic.twitter.com/DsnyhrkcAU

Liverpool’s exit means that despite Premier League and Champions League glory under Klopp, the German has still yet to lead them beyond the fifth round of the world’s oldest cup competition, despite having six attempts.

It also continued the German’s poor record when leading teams to Old Trafford, where he has not won in six visits.

Fans latched onto one particular post-match image which encapsulated the mood as Klopp approached Fernandes for a fist-bump, and was then pictured appearing to growl as he looked away from the Portuguese with his other first clenched and down by his side.

Fernandes’ face wasn’t seen but fans suggested the Portuguese was carrying more than a hint of a smile.

“He can’t even look Bruno in the eyes,” joked one fan, while others posted memes mocking Klopp’s supposed frustration.

With reigning champions Liverpool also trailing United in the Premier League – where they lie fourth, six points behind Ole Gunnar Solskjaer’s men – Klopp is facing significant scrutiny as to the direction his team is heading.

There are mitigating circumstances as defensive pair Virgil van Dijk and Joe Gomez remain injured, as does Portuguese forward Diogo Jota, who made an instant impact when he arrived from Wolves last year.

The German, however, tried to remain upbeat, saying afterwards at Old Trafford: “I saw a lot of steps in the right direction and that’s all good.”

“It’s not what we wanted, so it’s frustrating…We weren’t on our absolute top [level], but we made a lot of steps in the right direction.

“You don’t have to worry about us, as a group we are really together.”

Next up for Liverpool is a trip to face Jose Mourinho’s Tottenham in the Premier League on Thursday – a match which appears crucial if the Anfield club want to restore confidence and keep a foothold in the title race.

A resurgent United host bottom-of-the-table Sheffield United on Wednesday as they aim to extend their 13-match unbeaten run in the league.