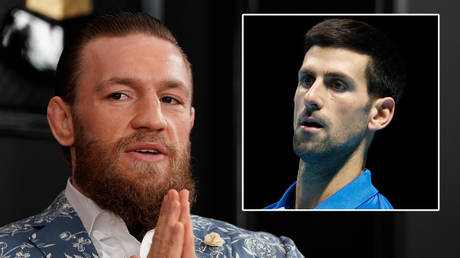 UFC star Conor McGregor has issued furious criticism at Novak Djokovic and other tennis aces complaining about their quarantine requirements ahead of the Australian Open, telling the pampered players to “get their act together.”

With His CPAC Speech, Did Donald Trump Send a Signal We Might Finally Be Done With Him?

McGregor is days away from his return to the UFC octagon, where he will rematch former foe Dustin Poirier on “Fight Island” in Abu Dhabi.

The Dubliner has completed several periods of isolation in advance of being cleared to fight, and says that that top level sports stars shouldn’t complain about their quarantine requirements – particularly ahead of a such a prestigious tournament.

World number one Novak Djokovic was among the players to petition authorities for a reduction of the mandated two-week period of isolation designed to inhibit the spread of Covid-19.

The Serb also asked that players be allowed quarantine in private homes, and with access to tennis courts and their coaches.

Vanessa Sierra, the Instagram influencer girlfriend of Bernard Tomic, was also the target of social media rage after she released a vlog during her isolation alongside Tomic in which she complained, among other things, about having to wash her own hair.

McGregor isn’t having any of it.

“I am surprised the tennis players would be kicking up,” the Irishman said on Wednesday to Australian television.

“To get to compete in such a prestigious tennis tournament or any tournament, a two-week lockdown prior – they should welcome that with open arms.”

McGregor has been a vocal supporter of methods designed to curb the spread of the deadly virus since it emerged last year. Upon the first lockdown in his native country, he released a video message asking for patience and for his fans to obey the strict measures introduced by the government.

He bought more than $1.2 million of medical equipment for Irish frontline health workers, ranging from personal protective equipment to ventilators.

Ahead of his first fight since global sport was ravaged by Covid-19 last year, McGregor says that the complaining tennis players should realize the privileged position that they are in.

“I would urge the tennis players to get their act together and also embrace it and relish it and be happy they get to compete,” he said.

“People can’t go to work and children can’t even go to school. Professional athletes are complaining about a bit of isolation? Come on, guys.”

Catalytic converter thefts on the rise