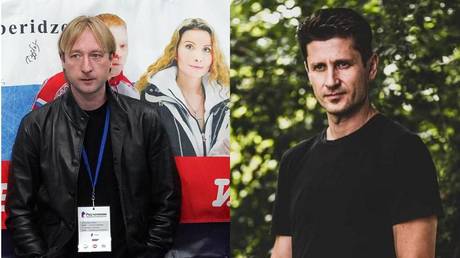 Russian figure skating legend Evgeni Plushenko has come out fighting in reply to an offer from choreographer Alexei Zheleznyakov, insisting he is available for a fight that the Russian Boxing Federation appeared ready to arrange.

Tensions between Russia’s high-profile figure skating schools have been fueled once again after Zheleznyakov, who is rival coach Tutberidze’s choreographer, called out the two-time Olympic champion for a fight and jibed that Plushenko would turn down his proposal.

“What if I call out Mr Pluhenko for a duel? We will have an MMA bout in a ring,” Zheleznyakov wrote.

“Come on Zhenya, don’t be scared. Though I think you will find some cowardly reason to avoid this fight. The only wish I have is to shut your mouth.”

The famed skater-turned coach was quick to respond gladly accepting the fight. He did, however, suggest that the choreographer was drunk while calling him out.

“I think he had consumed too much alcohol before losing his mind,” the former skater said.

“If he wants an official fight, I will gladly accept it. If he wants an MMA fight, let’s arrange it. With boxing gloves or without, I’m ready.

“We can find a ring, no problem. Though I don’t even know what this guy looks like, but I will accept the fight.

The Russian Boxing Federation said it would be willing to sanction the scrap. “All such conflicts should be resolved in the boxing ring in appropriate equipment,” pointed out Kirill Schekutyev, the Deputy Secretary General of the body.

“We are ready to organize this fight in the ring with professional judges, gloves and protection.

“Any conflicts can be resolved in sports: this is a good example for the younger generation. Boxing is a gentleman’s sport.”

The online spat between the two leading figure skating camps flared up last spring after two of Tutberidze’s stars, Alexandra Trusova and Alena Kostornaia, left the school to train at Plushenko’s academy.

“Apparently Plushenko insulted Zheleznyakov so that he decided to fight,” Tarasova said.

“But his acceptance to fight is nothing more than PR. I wish I talked about his skaters and his coaching achievements, not about fights.”