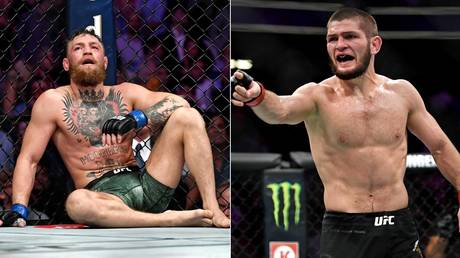 Conor McGregor has taken aim at Khabib Nurmagomedov over his decision to retire at the peak of his career, claiming the Russian star is running scared of a rematch with him.

McGregor and Khabib fought two years ago at UFC 229, where the Russian superstar dominated proceedings and even dropped the much-vaunted Irish striker with a big overhand right en route to a fourth-round submission victory.

That fight was packed with controversy due to the heated nature of the build-up, which saw tempers boil over when McGregor attacked a transport bus containing Khabib and a host of other fighters at UFC 223 in Brooklyn, New York. That attack landed McGregor in legal trouble, but the Irishman avoided jail time.

But, when the pair eventually were booked to fight at UFC 229, McGregor’s pre-fight slurs and jabs at Khabib proved to be irrelevant on fight night as Khabib claimed a routine victory to extend his undefeated record in the cage. He then went on to defeat Dustin Poirier and Justin Gaethje to take his record to 29-0 before announcing his retirement from the sport.

However, UFC president Dana White seems convinced he can convince Khabib to return, and rumors linking Khabib with a rematch against McGregor are running wild ahead of the Irishman’s upcoming fight with Poirier at UFC 257 on January 23.

And, if the fight does eventually happen, McGregor is convinced that the result will be very different the second time around.

“I think he’s afraid to fight me, that’s for damn sure,” he told ESPN.

“And I don’t blame him. I know exactly what to face.

“I faced the best of him that night (and) he fought the worst of me on that night. He knows it, I know it, his team knows it.

“I’m the answer to destroy that man. He can pull the wool over people’s eyes for only so long.”

Khabib’s retirement came in the aftermath of the untimely death of his father, coach and mentor, Abdulmanap, following complications arising from COVID-19.

After announcing his retirement, Khabib explained that he did so to honor a promise he made to his mother following his father’s death.

But while McGregor said the Russian star is crazy to have walked away from the sport at this point in his career, with the UFC’s lightweight division looking stronger and more exciting than ever.

But he curbed his criticism with a note of respect as he gave a nod to Khabib’s recent family bereavement.

“I think his hand was shown. He’s not a true fighter in my opinion,” he said.

“How could you walk away? There’s so many great fights to be had.

“Think of the (Nate) Diazes, the (Tony) Fergusons, there’s so many wild fights, the (Charles) Oliveiras, the rematch against me.

“I think it’s just preposterous to walk away. Not only did he sh*t on the bus, I think he p*sses on the chips also. I think he showed his hand.

“But then, at the same time, you know, there is family issues. It is what it is. So all the best.”