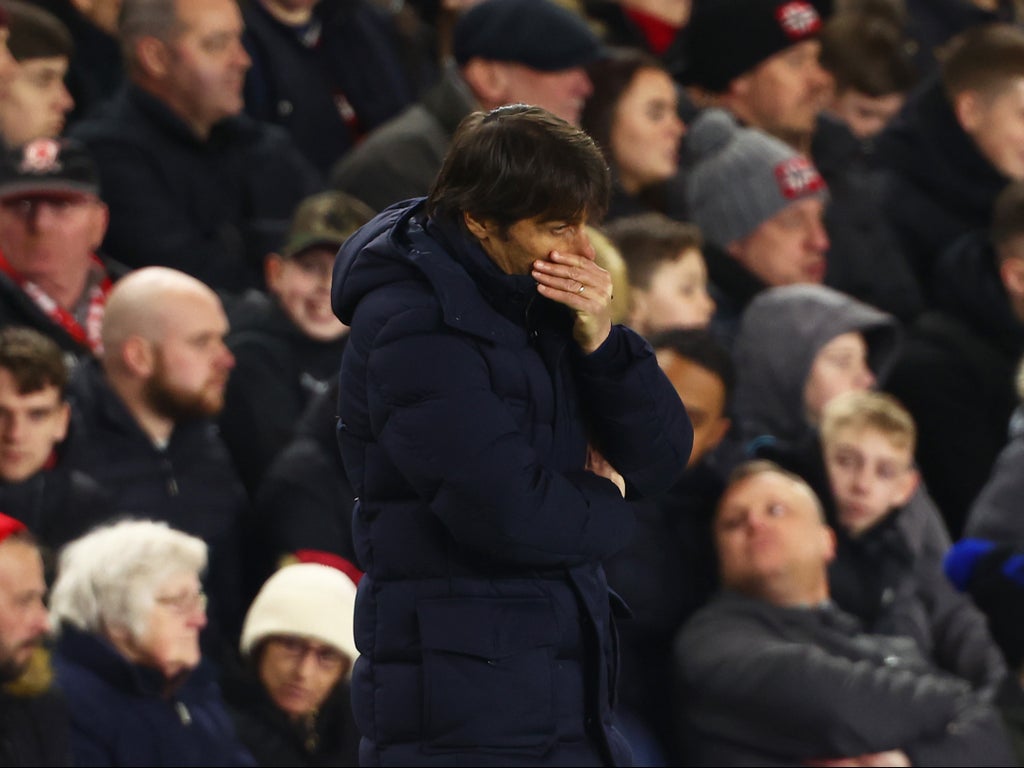 Antonio Conte admits his Tottenham Hotspur side are experiencing “too many ups and downs”.

Spurs crashed out of the FA Cup at the hands of Middlesbrough on Tuesday night as a 1-0 extra-time defeat condemned the club to a 14th season without a trophy.

Boss Conte remained surprisingly calm in the wake of the loss, at odds with his reaction to a similar defeat at Burnley last week, where he appeared to question his ability to fix Tottenham’s problems.

A major issue, which Conte accepts he “can’t hide”, is inconsistency, with the Boro loss following a thumping win at Leeds and the defeat to Burnley coming after victory away to Manchester City.

“The truth is that we are talking about a defeat,” the Italian said. “The last game we won, two games ago we lost, three games ago we won, and I think that I can’t hide the reality, no.

“The reality (is) that we are having too many ups and downs. We have to try and work, and I think this is a problem now and maybe also in the past.

“In my opinion there is only one way to try to improve – to continue to work many aspects and to persevere.

“You need to have patience in this process and to hope in the future the situation will be much better and (you will) not (have) to wait for a long time.”

Middlesbrough match-winner Josh Coburn was in contrast revelling in “the best feeling in the world” after firing his side to victory.

The 19-year-old, who came through the club’s academy, climbed off the bench to score the decisive goal as Boro followed up their fourth round giant-killing of Manchester United with another prized Premier League scalp.

Coburn fired home the only goal of the game in the second period of extra-time as the Championship side earned a deserved win.

He told the club website: “It is an amazing feeling, in front of all the fans, you can’t get better than that.

“I thought the lads did excellent, I thought we had chances to win it, even in 90 minutes. Thankfully I came on and got the winner and that was enough.

“I probably could have had a hat-trick to be honest, but I am buzzing. We knew they were going to have a lot of the ball, but we took our chance.

“I can’t really remember it that well, it was a great ball from Crooksy (Matt Crooks) and it sat really nice for me and I hit it as hard as I can and luckily it’s gone in.

“It’s the best feeling in the world, in front of all the fans is just amazing, they got behind us.”